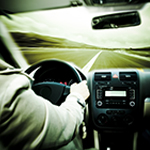 A man was taken into custody following a high-speed chase along the North Freeway early Friday.

The chase started around 3:30 a.m. when an officer tried to stop a sedan for an alleged traffic violation in the 11000 block of the North Freeway.

According to police, the driver refused to stop and led Houston officers northbound to FM 1960 at speeds of about 100 mph. The man exited and made a u-turn to Cypress Station and then Hafer Road.

Eventually the man pulled into his apartment complex and surrendered.

The suspect told police he thought if he made it back to his house, his car wouldn’t get towed, but officers towed the vehicle anyway. Officers said they believe the man threw something out of his car during the chase.

The man allegedly also told officers he sped away because he has warrants out for his arrest.